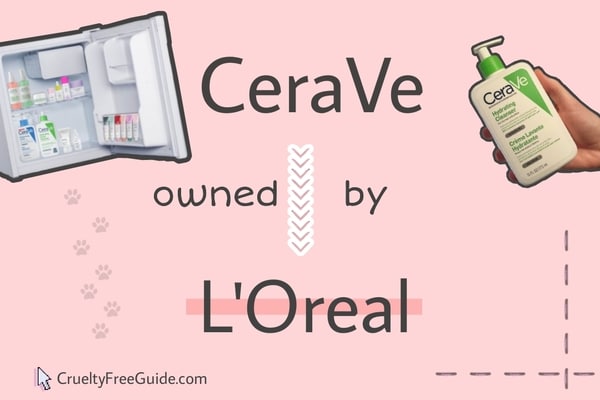 L’Oreal owns CeraVe in 2023. It acquired the drugstore skincare brand, CeraVe in 2017. Tom Allison is one of the co-founders of the cosmetic company. Cerave was officially introduced in the US market in 2006.

CeraVe is a popular name in the skincare industry. As someone who loves animals and beauty, I have already covered the vegan, sustainability, and cruelty-free status of CeraVe here. Let’s find out more about this non-cruelty-free company.

Who Owns CeraVe? Is the Parent Company Cruelty-Free?

All thanks to L’Oreal Group, CeraVe now sells in over 40 countries. Tom Allison co-founded Cerave in 2005 when researchers joined forces with dermatologists. It led to the origin of the drugstore brand, CeraVe in 2006.

Who is CeraVe owned by?

Cerave is owned by L’Oreal Corporation since its acquisition in 2017. L’Oreal is a huge conglomerate that owns many beauty brands such as Garnier, Lancome, Maybelline, Urban Decay, NYX Cosmetics, Matrix, La Roche-Posay, among others.

Is the Parent Company Cruelty-Free & Vegan?

Cerave’s parent company, L’Oreal is not cruelty-free or vegan-friendly. It still tests on animals wherever mandated by law. The product ingredients are also not entirely vegan. Neither L’Oreal nor Cerave is certified by any reputed Cruelty Free Organizations and Vegan Associations.

Tom Allison (his Twitter) co-founded Cerave alongside researchers and dermats. Currently, Allison is the Senior Vice President of Marketing of CeraVe. The brand was a hit due to its science-backed skincare at a pocket-friendly price range for consumers.

Where is CeraVe made?

Headquartered in New York, Cerave is based in the USA. However, its products are not made in America but in France.

Are CeraVe products made in China?

No, Cerave products are not made in China. Rather, Cerave imports its products to China. So although not manufactured there, Cerave is sold in China under the ‘imported products’ tag.

Where is CeraVe sold?

Cerave sells its products across the globe. You’ll find CeraVe products in America, Asia (including Mainland China), the Middle East, Africa, and Europe.

That’s a wrap for now. To conclude, I’ll say that Cerave and its owner company lack transparency in ethical practices. I don’t recommend these brands. Instead, go for the cruelty-free and vegan dupes of Cerave which other readers and I love.